To demonstrate this behaviour, we assume that we are working on a project and at some point, we branched off to a dev branch to work on some exciting new feature. As we are working we find some other important issues, or maybe some minor issues that are not relevant to the new feature and decide to fix them too. Now, there are two approaches we can take in such situation. The first is to commit in our current branch and then use git cherry-pick to introduce these changes to the master (or some other) branch. The second approach is to stash any unsaved changes, create another branch and commit these changes there. I personally prefer the second approach as it makes your life way easier if your are contributing on a project and need to make a pull request on Github or create a patch. For our example, we will take the first approach and commit anyway.

So, after some work on the dev branch, the tree will look like this: 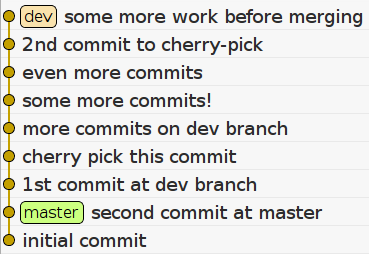 I have used silly commit messages like “cherry-pick this commit” to indicate which commits we will cherry-pick into the master branch. Let’s do that now:

If we use git log on master, we will notice that we have our new commits, but with different SHA-1 hashes. This is happening because when we cherry-pick commits, git creates new commits on the master branch which introduce the changes of these commits. At this point, the state of the repo is the following: 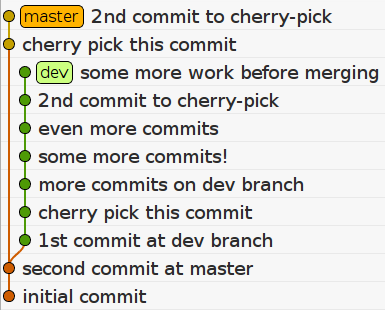 At some point, we are happy with the work on the dev branch, and decide to merge the dev into master. However the master branch has changes since the time we initially branched to work on our features. This means that we cannot use a fast-forward merge. If we switch to master branch and run git merge dev then a new commit will be introduced. This is the standard behaviour of git when doing no-fast-forward merges. Sometimes this may be desirable, but some other times we prefer a linear history. This will be the repository state after a merge: 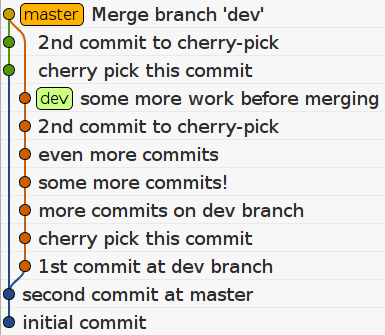 This is where the rebase command comes into play. Rebase can be used to rewrite the git history. It allows us to extract the changes of a commit(s) and re-apply it ontop of a branch.

We will use it to introduce the new commits of the master branch to our dev branch and then replay all the work of the dev branch on top of these commits. In our use case, the “new” commits of the master branch are the cherry-picked changes. When rebase will start to re-apply our work, it is smart enough to not apply the same changes the second time, and thus removing the duplicate commits. Running:

will bring our repository in the following state: 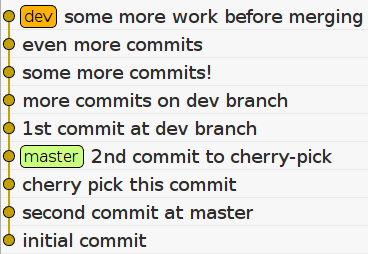 As you can see, the cherry-picked commits look like they never existed on the dev branch. Also, now we can use a fast-forward merge:

You can find more information about rebasing and cherry-pick at the git-book and the relevant man pages.